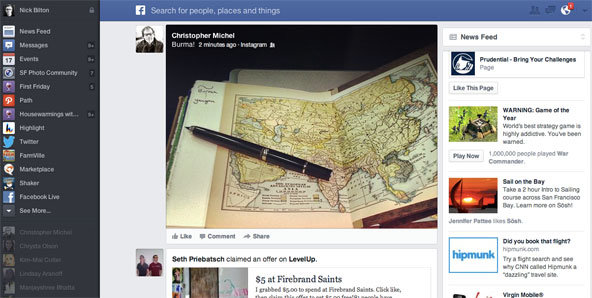 Facebook is finally learning the lesson that all media empires must eventually grasp: for the people who consume its content, less is often more.

On Thursday, the company announced a major overhaul of its News Feed that makes content larger and more visually appealing. I had an opportunity to try out the new look, which feels clean and well designed.

As I’ve noted in the past, if you picked up a copy of The New York Times 100 years ago, you would have seen a messy front page with more than 50 news headlines. Today, the front page of the newspaper has six stories and a couple of large photos.

Rather than being greeted by a waterfall of tiny photos and dozens of links on your News Feed, you will now be shown large photos and lots of flowing white space. This allows each post to breathe a little, eliminating the claustrophobia of the old design.

In the top right corner, there is now an option to see content-specific feeds, so you can change your News Feed from a mishmash of everything as it flows in to just the posts shared by your friends or the groups you follow. You can also choose to see posts by genre, like those that contain photos or music.

One of the goals of the redesign was to create a more consistent experience between mobile and the Web. Designing a Web site and apps that can translate between a four-inch screen and an extra-large computer monitor is not simple. But Facebook seems to have done a stellar job with this challenge.

However, in the process of focusing on multiple devices, the company seems to have broken the consistency between the News Feed and people’s profile pages on Facebook.

Before Thursday’s redesign, images in the News Feed were mostly square, and often the same size as those that appeared on people’s profile pages. In the new version, images are much larger and rectangular, but the old profile pages look the same. Bouncing between the two experiences can feel pretty jarring.

There are still two types of ads in the News Feed. Those that sit directly on the right of the screen, much like the old design and the sponsored posts that flow into the feed and look like normal Facebook updates. Given that Facebook’s algorithm decides what people see, it could run into trouble if customers become frustrated by large sponsored ads consuming most of their screen.

Either way, the new look is another signal that design is becoming one of the most important factors in technology. Sometimes companies like Facebook have gone into the past to learn that.