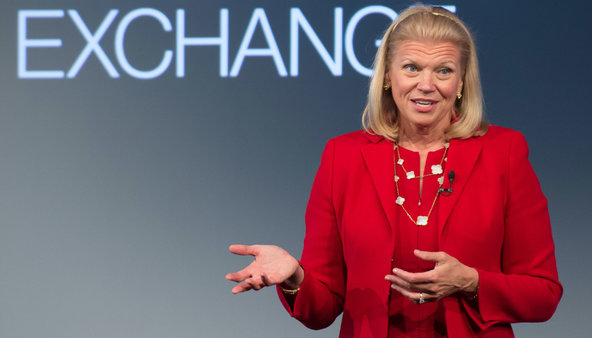 Five years ago, Samuel J. Palmisano, then chief executive of I.B.M., gave a speech at the Council on Foreign Relations on the big opportunity ahead for modern computing technology to help businesses, government agencies and other institutions operate more intelligently. His remarks captured an emerging trend that opened the way to a large, lucrative business for I.B.M.

On Thursday evening, his successor, Virginia M. Rometty, is scheduled to deliver a speech in the same setting, looking at how far technology has come and its implications for how business and government are managed.

In 2008, Mr. Palmisano spoke of the accelerating pace of computer processing, storage and software that exploited artificial intelligence. He pointed to the explosion in data from the Web, social networks and sensors. He mentioned I.B.M., if at all, only in passing.

But to the vision he sketched out Mr. Palmisano attached the term “Smarter Planet.” It became the tagline for I.B.M.’s highly successful campaign to sell software and services — and sometimes hardware, too — to corporations and governments for an array of “smart” projects.

For Ms. Rometty, the script is similar in the sense that it is intended for an audience beyond the business community and refers to I.B.M. by name only once.

Still, the context is quite different. Mr. Palmisano gave his talk in the fall of 2008, when the financial crisis was sending the world’s economies into a tailspin. His speech gained a wider audience only partly because of what he said about technology. He was the chief executive of a major global corporation declaring that it was a good time to invest for the long term rather than pull back in a defensive crouch.

Today the economy is growing, if slowly, and corporate America is thriving. Yet Ms. Rometty’s speech — like her predecessor’s — seeks to broaden the discussion of the opportunity and implications of technology trends. Hers, in some ways, is a more subtle message about the next step — the broad absorption of this advancing technology.

In an advance copy of the speech, Ms. Rometty points to three effects of the smart technology, which these days flies under the banner of Big Data. She calls them three lessons.

“Lesson 1: Decisions will be based not on ‘gut instinct,’ but on predictive analytics.”

“Lesson 2: The social network is not just the new water cooler; it’s the new production line.”

“Lesson 3: Value will be created not for ‘market segments’ or demographics, but for individuals.”

Each of the three themes or lessons is illustrated by examples: Memphis police using data analysis to curb crime; a Mexican cement maker tapping the crowdsourced intelligence of its workers in product development: and the Obama campaign’s sifting of data to pinpoint get-out-the-vote efforts.

Ms. Rometty concludes by saying, “The challenge is not the technology. The challenge, as always, is culture — changing our entrenched ways of thinking, acting and organizing.”

Her point echoes a message management experts have been making for some time. I shared a copy of the speech with Erik Brynjolfsson, director of the Center for Digital Business at MIT’s Sloan School of Management.

In an e-mail, Mr. Brynjolfsson said, “I agree very much with the speech. The technology has been available for a few years now to create a management revolution based on big data, and now we’re beginning to see more and more companies undertake the much harder job of reinventing their business processes and culture to take full advantage of those technologies.”

Any speech by an executive, especially one that aspires to reach a wider audience, walks a line: How much is it fresh information and thoughtful insight versus a self-serving sales pitch?

Decide for yourself. Ms. Rometty’s speech is scheduled to begin at 6 P.M. Eastern time on Thursday and to be webcast live on the Council on Foreign Relations site and on I.B.M.’s Smarter Planet blog